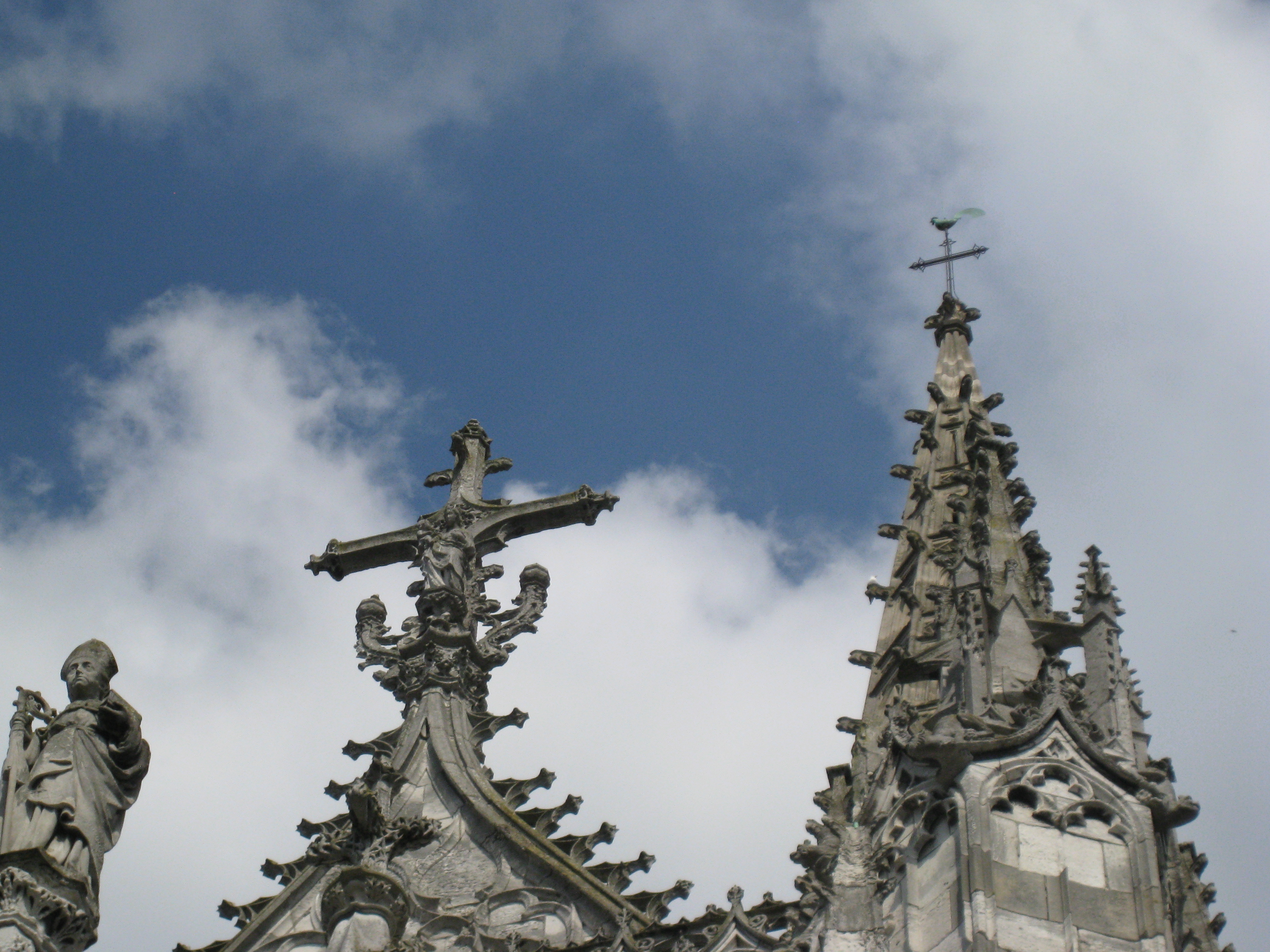 Enjoyed another great breakfast made special for us and had a nice chat with Drew and Lynn (the newlyweds) while we ate.  Forgot to mention (once again the memory thing), that we had toured the brewery yesterday with Drew and Lynn at the same time.  Joel and Walt left to go pick up our rental car from Europcar.  We were all hoping it wasn’t going to be a Smart Car since Joel had told them when reserving it that we needed room for 4 people and our luggage.  We ended up with a Mercedes 4 door sedan or something (maybe it was considered a wagon).  This will do!  Off we went on our quest for the next adventure back in France.

I’m thinking we didn’t really make any stops for sites on our way to Rouen except at a rest stop for a bathroom break and leg stretch.  While the guys walked up this spiral tower (I opted not to do fifty million steps since I was having difficulty with steps with my right knee), I stood at the water and watched the ducks and carp.  One duck had 10 ducklings and another had 5 ducklings.  Can one duck have 10 babies or is it likely that she took over ducklings that another duck had left behind?  The duck with the 5 ducklings was the one I took most interest because the babies were probably only days old.  Cute little fuzzy babies!  The carp was spawning, so they were splashing around big time in the water.

We found our way to Rouen without any difficulty and parked the car in a parking garage (hoping this would be safer than somewhere along the city streets since the car was loaded with everything we had).  We walked around in search of the tourism office (this being the first task in every new city so we could find our way around).  We found it and saw that it was directly across from a beautiful cathedral which was in the process of being renovated (a common occurence as we would notice along the trip).  This was the Cathedrale Notre-Dame de Rouen.  We grabbed some lunch someplace and then headed to the Jean d’Arc Musee.  This is a wax museum with the depiction of her life.  We then went to the old portion of the city and saw the Eglise Saint-Maclou (Eglise is church in French) which is one of the most beautiful testimonies of the “flamboyant” Gothic style, the late flowering of this art before the advent of the Renaissance architecture.  We tried to go inside the Saint-Ouen Abbey Church, but it was not open while we were there.  We walked through the Old Market Place and saw the Jean d’Arc burial place and where she was burned at the stake.

We purchased some vin (French for wine…figure I might as well show some of the words I know) and went on our merry way to our next B&B.  We arrived sometime between 7:00 and 7:30 not long before our dinner reservation of 8:00 at the B&B.  The B&B was called Le Brecy which was in a very cute farm/old town.  This place was directly across from a cow pasture which I could see out one of the windows in our room.  We were up on the 2nd floor in one portion of the house, and Joel and Walt were on the main level next to the dining room.  The other guests at the house were from Italy.  The set-up was very personal.  We dined in the dining room of one part while the other guests ate elsewhere (possibly out in the front of the house).  There was a farm right next to the B&B that we visited for a few minutes prior to dinner.  The wife was out with 2 of her kids feeding the rabbits.  Oh my gosh…how totally cute!  There were 2 baby bunnies, and a chicken with 1 day old peeps.  They probably had about 20 rabbits in cages.  The wife and kids chatted with us a bit and took us into their home to show us their iguana and the iguana eggs they had in an incubator.  They also had a really sweet dog and a lop-earred bunny as well as lots of chickens, goats, roosters, and probably more animals we didn’t see.  We enjoyed a very nice dinner then took a walk (about 1-1/2 miles or so) to the Seine River to watch the sunset.  We probably only started our walk down toward the river somewhere between 9:30 and 10:00 and still made it down to the river in time to see the sun setting.  We enjoyed a bottle of wine at the river and took some cool pics.  It was an enjoyable walk although seemed very long considering my knee pain.  I even had to do a gimpy run at several points to catch up to the guys since I stopped multiple times to take pictures of cows, horses, oxen (or some kind of cow-like creature that looked like it was wearing a toupee).  We found a shortcut on the way back by cutting in between some houses.

We got back to the B&B and crashed for the night.